Cross-border shopping
Spring-time is here and it's time to replace the beat up tires on the A4. I ended up ordering some Kuhmo Ecsta SPT's from Tirerack; it's still significantly cheaper to order them from this U.S. retailer, pay for shipping, brokerage fees, duty, GST/PST than it is to pick up these same tires locally.

Perhaps the new tires will breathe some new life in my trusty A4. I still want to have some fun in the car that I drive, given Janet tends to drive the GTI.

New winter shoes for the GTI

While we've had a mild fall, it is time to put the winter shoes on the cars. My initial plan was to try the GTI's all-season tires (Continental ContiProContact) this winter. But the GTI will largely be used by Janet and baby Brayden so I thought winter safety really should be a priority.

Calling around the local shops winter wheel and tire packages (16") could be had for $899+taxes for Gislaved (Swedish) tires and steel rims or $999+taxes for performance winter tires (Pirelli Sottozeros) and steel rims.

Thinking about the strong Canadian dollar, I looked stateside to tirerack.com and found I could get good winter tires (Bridgestone Blizzak REVO 1s) and aluminium alloys (that look a heck of a lot better than steel rims as you can see) for less including shipping, duty, taxes, and customs brokerage fees.

So I put in my order and expect some pretty big boxes from UPS next week. 5-Door GTI
Originally uploaded by who_ca.
We've added some driveway art in the form of a new Volkswagen GTI. It's a fun, tossable, little car that still provides the practicality we need thanks to the 5-door configuration.

Some of you may recall pictures of a sweet GTI in my driveway. That was of Mike and Dawn's ride and, yes, we liked it enough we bought one ourselves.

Cool car, strong cups
The problem with the camera on my phone is that I take the occasional picture and then forget about it. Here's one such photo from back in September of 2006 during the filmfest. Ashley had a nifty display with a Lamborghini Gallardo sitting on top of some tea cups. 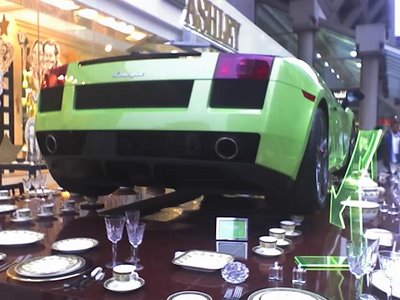